Recommended casinos to Play Age Of The Gods Mighty Midas 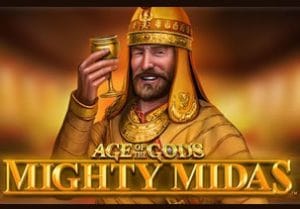 There’s a suitably lavish look to the design in Age of the Gods: Mighty Midas. The setting is an ornate room in a palace. On the reels you’ll see grapes, goblets, apples, roses and a chicken dinner. They’re joined by 5 higher value character symbols. The best of these is Midas himself who will get you a payout of 12.5 times your stake if you land 5 on 1 of the game’s 40 paylines.

Land the Pentagram scatter on reels 1 and 5 on the same spin and you’ll trigger the following bonus features:

As part of the Age of the Gods Jackpot Network, you’ll also have a shot at landing a progressive prize here. The round can hit at any time. Pick from the coins to see which jackpot is awarded.

In the Greek myth, Midas’ touch was a curse. It can be a real blessing in this slot game though. Those extra wilds can really get things moving, especially when you trigger the free spin rounds. There’s up to 8,650 times your stake on offer from each Ruby Spin with the potential 30x multiplier!

The design is as impressive as usual for an Age of the Gods slot game. The range of features really stand out here though. If you like the Greek myth and legend theme, then Age of the Gods: Mighty Midas is a must play. I would also suggest you try Age of the Gods which is volatile and has lots of free spins features.