Recommended casinos to Play Age Of The Gods King Of Olympus 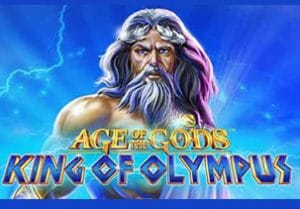 Accompanied by a soaring, epic soundtrack and set against a mountain top skyline, the reels include A to J playing cards alongside more themed imagery. Look out for ancient pottery, lutes, galleys, soaring eagles and Pegasus, the winged horse - land 5 of these for a 1,000 coin payout.

Zeus, sporting a fine bearded and looking mean and mighty, is the game's wild. The king of Olympus substitutes for all other symbols apart from the scatter - land 5 of these in a payline for an impressive 3,000-coin haul.

The main feature offering in Age of the Gods King of Olympus is triggered by landing 3 or more of the Temple of Zeus scatters anywhere on the reels. In addition to a payout of 3, 10 or 100 times your stake, you'll trigger the Free Games feature and be awarded 10 free spins.

A couple of goodies come attached to these free spins too - the Zeus wild will appear in the central position of reel 3 on each of your free spins. Multiplier prizes are on offer as well. They start at 2x and will increase by 1 after every second spin. By the time you reach the final spin, you'll be playing with a 6x multiplier.

Age of the Gods King of Olympus also comes with no fewer than 4 progressive jackpot prizes. Part of the Age of the Gods slot series, the jackpot round is triggered at random following any spin, successful or otherwise. Once triggered, you'll be taken to a new screen and presented with a grid of 20 gold coins. Click on the coins to reveal a symbol - land 3 of the same symbol and you'll be awarded that jackpot prize.

The King of Olympus may have been god of thunder but the slot game isn't quite as volatile- the variance here is in the medium range with a balance range of payouts offered. Of course the free spins feature is the likeliest way to win big. If the Greek gods are smiling, then those sticky wilds and multipliers can potentially deliver an Olympian haul of coins. For your reference, it’s identical in terms of gameplay as Iron Man 2.