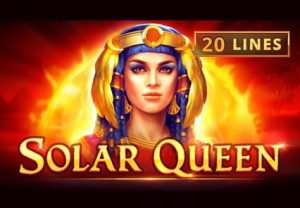 Set against an Egyptian landscape at night, the reels include A to 10 royals as well as 6 higher paying Egyptian hieroglyph symbols. The Queen is the best standard symbol, awarding 0.1, 1, 2.5 or 10 times your stake if you land 2, 3, 4 or 5 on a payline. She appears in stacked formation. Those amounts are on offer from the wild too.

Central to much of the best action in Solar Queen is the sun symbol. This triggers the Flaming Frames feature which is a sequence of 10 spins. Those symbol positions from the triggering spin, plus anywhere a sun symbol lands, are framed by flames. On the 10th and final spin, all the flaming positions turn into wilds. If a sun symbol lands in a Flaming Frame, it increases a multiplier by 1x. The reels go back to their standard state following that 10th spin.

Land 3 of the scatter symbol to trigger the Free Spins feature. Once in, you’ll be awarded 10 free spins. Every sun symbol that lands during the feature turns into a wild. That wild will then lock in position for any free spins you have left. If you trigger the free spins with a multiplier active, then that multiplier is carried through to the free spins.

We enjoyed this virtual trip to the desert. The visuals are very nicely done. It’s the gameplay that makes Solar Queen stand out though. The extras on offer from the Flaming Frames feature can certainly pep up the base game. With potential multipliers and sticky wilds in play, the Free Spins feature can be well worth hitting. The variance in on the high side of medium with top payouts of 2,688 times your stake on every spin or free spin.

The ancient Egyptian theme is an enduringly popular one. Keeping things fresh is no mean task and Playson has had a pretty good crack here. If you like this genre, then the classy design and gameplay make an audience with the Solar Queen one worth making. My preferred choice would be Legacy of Egypt from Play ‘N Go which also comes with big multipliers.