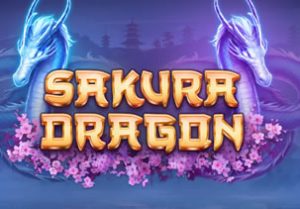 There’s gentle, understated feel to the visuals here with pastel shades dominating the colour scheme. With hills and pink blossom trees in the background, you’ll see a pair of magnificent dragons watching over the reels.

On the reels are Japanese-style A to 9 symbols as well as a fox, a deer and a pair of women in traditional dress. The best paying standard symbol is the bearded man. Land 5 of these in combination and you’ll receive a payout of 25 times your stake.

Potentially even more rewarding is the wild (the pink flower) which pays up to 50 times your stake per line. The standard wild can appear on reels 2 through 5 only. 1 of the game’s 2 extras can help create those 5 of a kind combinations though.

Free Spins feature - land 3, 4 or 5 of the Bonus symbol on the same spin and you’ll pocket an award of 5, 10 or 50 times your total stake. You’ll also receive 8, 12 or 20 free spins. The Wild feature is in play during the free spins. In fact, you can expect them to take flight more regularly than in the base game. Landing 3 or more scatters on the same free spin results in a re-trigger and even more free spins – there’s up to 50 to be played in total.

This Japanese tale is a relatively simple one. The visuals give the game a rather tranquil feel. Don’t be fooled though – this variance is in the medium to high range. Saying that, you can win 750 times your stake on each spin/free spin.

You’ll have seen this selection of features in plenty of other slot games. They’re perfectly well done though even if they’re not especially innovative. We liked Sakura Dragon. Combining classy design with simple gameplay works rather well. If you like the Asian theme, then it’s certainly worth a closer inspection. I would rather play Dragon Maiden from Play ‘N Go which offers bigger potential payouts on each spin/free spin.