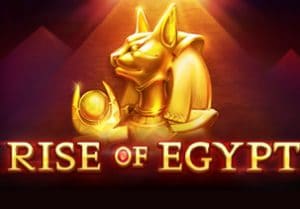 Playson has created a very classy looking game here. The reels are a regal shade of purple and include very stylised royal values. The obligatory Egyptian hieroglyphs are present and correct. Very nice they look too. You’ll see the likes of the ankh cross, the eye of Ra and the bird god Horus. The scarab beetle is the most lucrative symbols, paying 20 times your stake coins if you land a 5-on-a-line combination.

Helping to create those winning combinations is the cat god Bastet which is the wild. This golden symbol appears on reels 2, 3 and 4 only and replaces everything apart from the scatter. When a wild hits, it fills the whole of that reel.

Rise of Egypt comes with a Free Spins feature - it has the potential to be a decent one though. To trigger it, you’ll need to hit 3, 4 or 5 of the pyramid scatter on the same spin. As well as a payout of 2, 15 or 50 times your stake, you’ll also receive a minimum of 12 free spins.

The expanding wilds are in play during the free spins. Every 1 that hits adds an extra free spin to your total, up to a maximum of 35. The wild goddess also develops some other magical powers during the free spins, upgrading symbols to higher value ones with bigger wins to match.

As you might expect, Rise of Egypt is a fairly volatile game with the variance on the high side of medium. There’ll be times when the payouts seem as dry as the desert (or the 2018 summer in England!). If the wild goddess works her magic in the bonus round, you can expect some very decent action – up to 944 times you stake on every free spin.

With so many ancient-themed slot games on the market, it’s hard for a new game to make much of an impression. Rise of Egypt manages that though. The design is superbly done and the expanding wilds and free spins with added extras make for an enticing combination. If you can’t get enough of all things Egyptian, then Book of Ra Magic from Novomatic is one to add to your playing rotation.