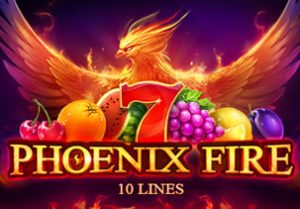 The visuals will be familiar to anyone who has ever played an old school fruity. You’ll see plums, cherries, lemons and oranges which award 3 times your stake if you land 5 on a payline followed by grapes and melons which pay 5 times your stake.

The bell comes next, delivering 10 times your stake. Top of the payers is the lucky 7 which pays 25 times your stake if you land 5 in combination. Winning combinations can start from reel 1 and reel 5 thanks to the win both ways game engine.

The phoenix is the game’s wild. This can land on reels 2, 3 and 4 only. Whenever it lands, it expands and turns the whole of that reel wild. You’ll also receive a re-spin with the expanded wild staying in position. If you land another phoenix on a re-spin, the process is repeated. It expands, locks in place and another re-spin follows, this time with 2 stacked wilds. You could end up with a 3rd re-spin with 3 wilds filling the middle 3 reels.

That’s it as far as features are concerned. You can expect to see the stacked wilds and re-spins at regular intervals. The variance is on the high side of medium with possible wins of 679 times your stake on each re-spin/spin.

Seeing a phoenix appear in the middle of a classic fruit machine is a little strange. It works well enough though. Don’t expect anything especially revolutionary on the gameplay front. This is a simple slot game, even accounting for the win both ways pays and expanding wilds.

If you like old school fruit machines with a twist or 2 thrown in, then the volatile Phoenix Fire does the job perfectly well. If you want more bonus features for example, you’ll be well served with Kingdom of the Sun Golden Age (also by Playson).