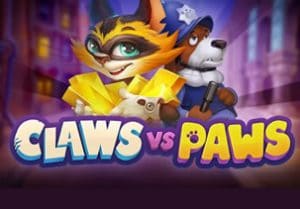 The back story here is that cat burglars are trying to rob the doggie bank. Joining the lower value playing cards are bones, keys and a policeman’s helmet. Most rewarding of the standard symbols is the Claws vs Paws logo which pays 25 times stake if you land 5 on a line.

The diamond is the wild - it replaces everything bar the scatter and offers awards of up to 30 times stake per payline. Playson has packed plenty of extras in here, starting with 3 randomly triggered base game features:

Claws vs Paws also comes with a trio of free spin rounds. These are triggered by landing 2 standard scatters plus a special bronze, silver or gold scatter:

Sliding Wild Free Spins feature - look out here for up to 3 sliding wilds that can appear anywhere on the reels. These sliding wilds drop down the reels with each free spin. The feature continues until all the wilds have dropped off the bottom of the screen.

Sticky Wild Free Spins feature - here you’ll be awarded 10 free spins. On each of them, the cat adds a random selection of sticky wilds to the reels. Watch out for the dog who can remove them though.

Claws vs Paws also offers the chance to claim achievements – the Achievements feature. These are awarded by landing tokens which can appear at random. Once you’ve collected enough, you can cash them in for a spin of the prize wheel where you can win cash prizes or trigger 1 of the free spin rounds.

This game of animal cops and robbers works well enough. The visuals are nicely done and there’s a good selection of extras. As far as volatility goes, Claws vs Paws sits in the medium to high range with possible payouts of 1,752 times stake (on every Progressive Multiplier free spin).

Whether you’re a dog or a cat lover, there’s plenty to enjoy in this cartoon caper. Even if you’re not really a fan of either, the bonus features make Claws vs Paws worth a spin. I would also recommend Diamond Dogs or Copy Cats (both from Net Entertainment) if you love cats and/or dogs.