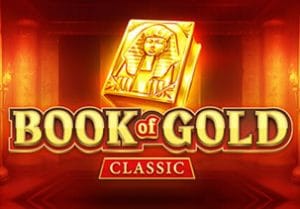 The set up in Book of Gold: Classic is fairly straightforward. Set against a desert backdrop filled with pyramids, the gold reels are made up of A to 10 royals alongside higher paying Egyptian hieroglyphs.

Joining the standard symbols is the book of gold which serves a dual role. First, it acts as a wild and substitutes for all of the standard symbols. It’s also a scatter and the key to unlocking the game’s Free Spins feature. Landing 3, 4 or 5 of them on the same spin results in a payout of 2, 20 or 200 times your stake as well as awarding 10 free spins.

Before the feature begins, the pages in the Book of Gold open and reveal a symbol. This special symbol will expand and fill the whole of its reel whenever it hits during the free spins. 3 or more scatters will retrigger the feature – there’s up to 50 free spins to be won altogether.

Playson has kept things very simple in Book of Gold: Classic. The understated design works rather well. There isn’t a huge amount of variety on offer from the gameplay. Land a high value expanding symbol when you trigger the free spins though and some top action is possible.

Be warned. This is an extremely volatile slot game with payouts of 5,000 times your stake on each spin/free spin (by filling the reels with the Egyptian Queen). There’s nothing on offer here that we haven’t seen in plenty of other similarly themed slot games – like Play ‘N Go’s Book of Dead. If you’re looking for variety, then it probably won’t be for you. Playson also offers you Book of Gold: Double Chance which is the same but with 2 expanding symbols in the feature as opposed to 1.