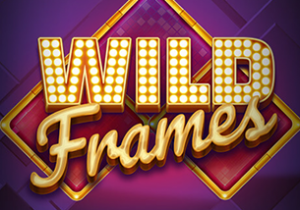 With the action taking place on a 7x7 grid there’s plenty going on in the Wild Frames grid slot. Thankfully, the rather slick design is up to the job. On the reels you’ll see a collection of glossy playing card suit symbols alongside bells, stars and diamonds. The most lucrative symbol is the lucky red 7 which pays 3 times your stake if you land a cluster made up of 5 symbols. A cluster of 30 or more matching 7s pays 500 times your stake. There’s also a wild.

The cascading reels game engine sees winning symbols removed. A new cascade then follows. These keep on coming as long as a new winning combination is created.

You could turn a losing spin into a winner thanks to a random wild drop. This can trigger on any unsuccessful spin and add between 4 and 6 wilds to the grid to greatly boost your winning chances. Wilds can create a sticky frame around their position. Multiple wilds on the same position can bring multipliers into play too. These only become live when you fully fill the Charge Meter and trigger the Wild Frames feature.

The Charge Meter is filled by landing winning symbols in a single set of cascades. Each symbol is added to the meter. When the meter has 20, 40 or 60 symbols, you’ll receive the Transform, Wildcard or Shatter features.

The top extra is the Wild Frames feature which activates when you fully charge the Meter with 80 or more symbols. The sticky wilds, plus any multipliers that are attached to them, become active for the cascade that follows. You can add extras sticky wilds and multipliers if you manage to overcharge the Meter.

Wild Frames is something a little different for Play ’N Go which often keeps their gameplay very simple. It comes together nicely though. The cascading reels and the Charge Meter extras deliver plenty of action. The Wild Frames slot can pack a hefty payout punch too with potential awards of up to 7,000 times your total stake from a single spin.

Be warned though, this is another super volatile slot. If you like high variance slots and the cascading reels game mechanic, then Wild Frames is well worth a spin – another game to play would be Play ‘N Go’s Wild Falls which offers 10,000 times stake wins per spin.