Recommended casinos to Play Rich Wilde and the Tome of Madness 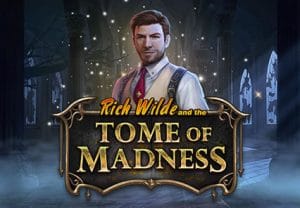 A creepy looking crypt is the setting for Rich Wilde and the Tome of Madness. On the reels you’ll find 4 lower value gemstones plus a skull, ring and dagger. The top standard symbol is the octopus motif necklace which pays up to 10 times your stake per grouping. The mystery tome is the wild. This replaces all of the standard symbols. Winning combinations are created by landing 4 or more matching symbols in horizontal and vertical clusters.

The action here takes place using a symbol drop game engine. After a winning combination hits, the successful symbols are removed and new symbols drop in from above to replace them. The symbol drops keep on coming as long as a new winner is created. Many Play ’N Go slot games are simple affairs - this is anything but. There are plenty of extras to consider:

Eye Marks - these are special positions that can appear at random on the reels. Land a winner in 1 of these Eye Marks and 2 special wilds are added to the grid on your next winless drop.

Portal - to the left of the reels you’ll see a portal. This if filled by amassing successive symbol drop wins. 2 special wilds are added after you’ve collected 7 and 14 symbols. Land a winner that includes the special wild and you’ll trigger the Abyss Portal Effect feature. This removes a row or column from the reels and adds them to the Portal.

If you manage to get 27 symbols in the portal, 2 more special wilds are added. Land a winner that features a special wild here and you’ll activate the Void Portal Effect feature. 1 symbol is then chosen at random with all instances of that symbol then removed from the reels.

Win with 42 symbols and you’ll trigger the Other World Free Round feature - here you’ll receive 1 free spin complete with 3 Portal effects. If you’ve managed to overcharge the portal and collect more than 42 symbols, then even more goodies come into play. For every 3 added symbols collected, 1 Portal extra is awarded, up to a maximum of 7. These Portal Extras offer Special Wilds and triggers to the Abyss or Void extras if you land a winner.

In the Other World Free Round feature, 11 or 12 Eye Marks will be visible. Open an eye by landing a winner on it. If all the eyes are open, you’ll be awarded a Mega Wild which moves down 1 row at a time before disappearing from the bottom of the grid.

At first glance, Rich Wilde and the Tome of Madness looks pretty complicated. The key to success here is getting on a winning symbol drop roll and bringing the wild extras and other goodies into play. Don’t expect that to happen too often though. As usual for a Play ’N Go title, Rich Wilde and the Tome of Madness is a high risk but potentially high reward game. Awards here can reach 2,000 times your total stake on each spin or free spin.

Rich Wilde’s latest outing is an enjoyable, if slightly complex one. If you like high variance treasure hunting, then that’s what you’ll find if you open up the Tome of Madness. I would also recommend you try some of his other adventures with Aztec Idols often overlooked.