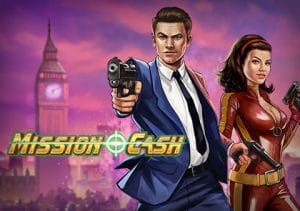 There’s a retro, comic book feel to the design in Mission Cash that’s reminiscent of Connery era Bond and classic 1960s TV shows like The Persuaders. The reels are set against a mission control backdrop. There you’ll find playing card suit symbols as well as the 4 higher paying secret agents.

There’s the Q-like Agent Green, the vampish Agent Purple, the fighting female Agent Red and the dapper hero Agent Blue – the latter pays up to 50 times your stake for 5 in combination. There are 2 extras in Mission Cash, both of which are well worth hitting.

Take the Shot Re-Spin feature - on each spin, you’ll see a crosshair symbol. This moves to a new position on each spin. If it lands on Agents Red or Blue, it activates the round. The Agent symbol expands to fill the whole reel and also turns wild (i.e. giving you a wild reel).

Free Spins feature - this round is triggered by landing the crosshair symbol on top of the pistol scatter. You’ll then receive 8 free spins. The Take the Shot Re-Spin feature is active during the free spins. In fact, it’s better than in the base game as it triggers if the crosshair lands on Agents Green or Purple as well as agents Red and Blue. Re-triggers are possible here too with up to 16 free spins possible.

Mission Cash is another very playable slot game from Play ’N Go. The comic book visuals are nicely done and the features are well worth hitting. As usual for a title from this developer, the action here is very volatile and the variance is high. You can win 1,000 times your stake on each spin, re-spin or free spin but getting a screen full of Agent Blue and/or wilds.

The chances of filling the 5 reels with wilds increases in the Free Spins feature as all 4 agents will expand to transform into wild reels. The Take the Shot Re-Spin feature can give you up to 5 re-spins in total which means wins of 5,000 times your stake.

We’re slightly surprised that there aren’t more slot games with the spying theme. Mission Cash is a good example of the genre. If you’re a Bond or Bourne fan, then it’s certainly worth a look. If you’re looking for big wins, The Sword and The Grail from Play ‘N Go would be my choice.