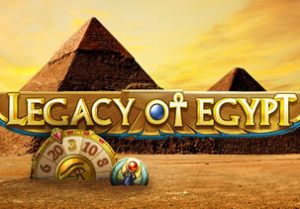 Legacy of Egypt is a terrific looking game - with a palace courtyard and ornate pillars as the backdrop, the reels include A to J playing cards and the animal gods Bastet (cat), Sobek (crocodile), Anubis (dog) and Horus (falcon). The most rewarding standard symbols are the Pharaoh and his queen. Land 5 of the latter and you’ll win 10 times your total stake. More rewarding still is the scarab beetle which is the wild. It replaces all other symbols apart from the scatter and offers payouts of 16.66 times your stake if you land a 5-symbol combination.

The best chances of landing a big score come from the Wheel of the Gods feature which is triggered by landing 3 of the Eye of Ra pyramid scatter on the same spin. As well as a cash award of 5 times your total stake, you’ll get to spin the Wheel of the Gods which awards between 3 and 20 free spins. A random multiplier is applied to each of those free spins, boosting them by between 2x and 10x.

Land 2 scatters on the same spin during the feature and it will trigger the Pyramid Spins feature. This is a series of between 3 and 8 extra free spins where the multiplier from the triggering free spin will be applied to all of them -up to 10x!

If you land 3 scatters during the free spins, you’ll also trigger the Pyramid Spins feature. This time, the numbers on the wheel are doubled, offering you up to 16 Pyramid Spins. Again, the multiplier from the triggering spin is in play.

The online casino shelves are groaning under the weight of so many ancient Egyptian-themed slot games. How can a developer create a game that stands out? By creating one where the volatility is sky high is a good place to start and that is just what Play ’N Go has done here. The variance here is as high as you will find anywhere and offers payouts of 5,000 times your stake on every spin.

This trip to the land of the ancient is a good one. The design is superb and the features offer some potential high risk, high reward action. If you enjoy the theme and very volatile action then Legacy of Egypt is well worth a spin. I also suggest you try the iconic Book of Dead from Play ‘N Go which has stood the test of time as well as the ancient Egyptian gods have.