Recommended casinos to Play Eye Of The Kraken 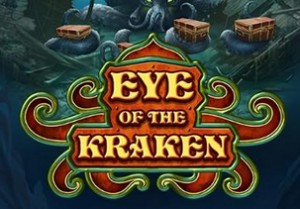 The Kraken is a mythical, tentacled underwater sea creature said to lurk beneath the waves off the coasts of Norway and Greenland - think the Loch Ness monster but much more fearsome. Eye of the Kraken pits players on a submarine journey where they can come face to face with the beast and hopefully sail away with plenty of coins.

The first thing you'll notice is the unusual 3x3 reel setup which is set against a murky underwater backdrop. The visuals are superb. Symbols on the reels include three members of the crew, diving boots, oxygen tanks, harpoons, compass, diving mask and torpedoes. The torpedoes are the biggest payer, offering 20 times your stake if you find 3 in a payline.

That's not all that's on offer from the torpedoes. Ever time one hits, a torpedo meter will drop from its starting point of 50 by one. When the meter reaches zero, you'll trigger the Conquer the Kraken bonus feature. Target 3 of the Kraken's tentacles and you'll win cash prizes which can reach up to 500 times your stake.

Find 5 diving helmets and you'll trigger Dive Mode – this is the free spins game where you will be awarded 9 free spins. Look out for the treasure chest scatter during the free games - the more you hit the bigger the prize with 150 times your total bet on offer if you manage to fill the reels with 9 chests.

When you hear rumbling and the reels start to shake expect a visit from the Kraken – this is in the base game. It flings its tentacles over the reels and in the process turns a number of the symbols wild, offering a second chance to win. Look out too for matching symbols in all 4 corners of the reels as you'll win a bonus prize of 10 times your stake. The same symbol on the middle of all 4 sides will award a 5 times stake bonus.

Play 'N Go has exceeded lofty expectations with the look and sound of Eye of the Kraken. The images and animation are superbly drawn with the action complemented by a quality, atmospheric soundtrack. As you'd hope from an adventure themed slot, the action comes think and fast thanks to the small game engine and the plentiful features. This is a quality offering in both looks and gameplay.

Even if you've never heard of the Kraken or the thought of a paddle on a pedalo makes you feel seasick, you'd still be advised to take a trip on this underwater adventure. It’s a medium variance game which I am sure will prove popular. For a similar theme, WMS’ Nemo’s Voyage is very good. I’d also suggest you try Riches of Ra which is their most played game.