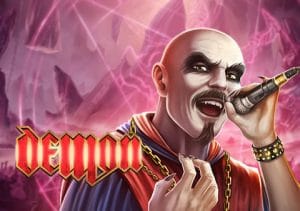 There’s a suitably creepy look to the design here. On the reels you’ll see royal values done in heavy metal style lettering as well as statues, faceless skeletons, gargoyles and blood-soaked crosses. The best payer is the lead singer who pays 1, 2.5 or 10 times your stake if you land 3, 4 or 5 on a payline.

The mask wild can land on the middle reel only. It’s joined by the wild amulet which can hit on reels 1 and 5.Whenever a wild mask lands on reel 3, the Wild Mask feature comes into play - all the singer symbols elsewhere on the reels will turn wild and a new payout calculation is made.

Land the wild mask on reel 3 plus amulets on reels 1 and 5 on the same spin to trigger the Free Spins feature. You’ll receive 11 free spins if the wild mask was in the middle of the reel, 6 if it was at the top or bottom on the triggering spin. On each free spin, your wins are boosted by a random multiplier of 2x, 3x, 5x or 8x.

Land wild amulets on reels 1 and 5 on the same free spin and you’ll trigger the Hell Spins feature and between 4 and 8 Hell Spins. Those Hell Spins increase to between 6 and 10 if there’s also a mask wild on reel 3. If the mask wild is on the middle of reel 3, the win multiplier is doubled for the rest of the Hell Spins meaning a potential multiplier of 16x.

Demon is a relatively simple slot game. Like most games from the Play ’N Go catalogue, it’s a very feisty one. The variance here is extremely high. It’s well designed too. There’s a genuinely creepy look to the visuals and you’ll hear a selection of devil-themed tracks playing in the background as you spin.

You can win a maximum of 2,500 times your stake on every spin, free spin or Hell Spin – saying that, the 16x multiplier in the Hell Spins feature could give you a whopping 8,000 times stake payout per Hell Spin but the maximum win amount is capped unfortunately. If you like the rock theme, Play ‘N Go also offers you Sabaton and House of Doom.