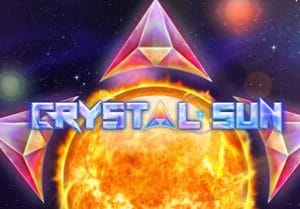 The set up in Crystal Sun is nice and straightforward. Set against a star-filled backdrop the reels are made up of 5 brightly coloured gemstones as well as a lucky 7. The best paying symbol is the bar which will get you a payout of 4, 8 or 16 times your stake if you land 3, 4 or 5 on a payline.

There are 3 different star wild symbols. These can land on the middle 3 reels only. As well as a standard wild, there are wilds that come with 2x or 3x multipliers attached. Whenever 1 of these wilds hit, the Wild Re-Spins feature triggers – the wild expands and fills the whole reel. It also awards a re-spin. If another wild lands on that re-spin, the process is repeated.

In theory you could end up with a re-spin with all 3 of the middle reels totally wild. Even better is if the wilds come with an attached multiplier - the payout is boosted by the multiplier shown. If more than 1 multiplier is on show, then the value of the multipliers are added together.

For example, a 2x wild and a 3x wild would lead to a 5x boost. Of course, the perfect combination is a trio of 3x wild multipliers which would send the payout rocketing by 9x.

Crystal Sun is a simple game but a potentially explosive one. This is an incredibly volatile slot game. We’re talking 10/10 on the variance front. However, there are wins of 4,000 times your stake available on each re-spin with the potential 9x multiplier. If you can cope with the potentially big bankroll swings, then there’s plenty to like about this simple, repetitive game.

Well designed and boasting a cracking feature, the explosive Crystal Sun is well worth a spin if you like volatile action – it’s quite similar to Net Entertainment’s Starburst but much more volatile and potentially rewarding.