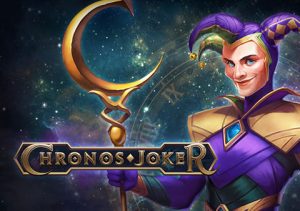 Chronos Joker is something of a departure for Play ’N Go. The action takes place on a 3 reel, 3 row, 5 payline machine. With the star-filled night sky in the background, you’ll see cherries, lemons, melons and plums. More rewarding are the 4 timepiece symbols. There’s a sundial, an hourglass and a pocket watch. The top standard symbol is the futuristic smart watch which pays 4 times your stake if you land 3 in a row. The Chronos Joker is the wild. Land 3 of these in combination for a payout of 16 times stake. All symbols can appear stacked.

On any spin, you could see a payout boosted by a random multiplier. Known as the Multiplier feature, the size of that multiplier is shown in the meter above the reels. It can be 2x, 4x, 5x or 10x. If Chronos is feeling benevolent, he can award Super Multipliers of 4x, 6x, 8x or 20x.

Land the same stack of symbols on 2 reels on the same spin and you’ll receive a re-spin with those 2 stacks held. Which re-spin feature you get depends on the multiplier that Chronos awards:

If you’ve come to Chronos Joker expecting Play ’N Go’s usual sky-high variance, you might be a little disappointed. The volatility here is in the medium range which is refreshing! The gameplay is also unusual for a slot from this developer but makes it more appealing in some ways.

Chronos Joker is simple enough but the variety of multipliers and whether they go up or down can take a little getting used to – you can win a cool 1,600 times your stake on each re-spin with the 20x multiplier though. It’s not our favourite Play ’N Go slot but if you want something a little different, then you’ll find it in Chronos Joker. If you want higher variance action, Cash Pump and Wild Rails are recommended.