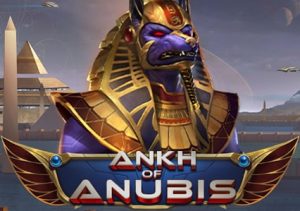 The theme might be ancient but there’s a futuristic look to the visuals in Ankh of Anubis. With a giant moon, pyramids and the mighty River Nile in the background, you’ll see a set of 3x4x4x4x3 reels which combine to offer 576 ways to win. Joining the lower value royals are gemstone-encrusted jewels. The best is the ankh cross which pays 1, 2 or 5 times your stake if you land 3, 4 or 5 on adjoining reels.

The fearsome Egyptian ruler Anubis is the wild. He substitutes for all the standard symbols. Anubis can appear on all 5 reels and land in stacks that are 1, 2, 3 or 4 symbols high. On any base game spin, you could see the Anubis Wilds feature strike. This adds a random assortment of extra wilds to the reels. A new payout calculation follows at the end of the spin with the wilds in position.

The golden pyramid is the scatter symbol. Land 3, 4 or 5 of these on the same spin and you’ll trigger the Free Spins feature. On offer are 10, 15 or 20 free spins. Each time an ankh cross lands during the free spins it’s collected in a meter.

Once you have 5 of them, you’ll trigger the Anubis Wilds feature which adds extras wilds into play. The meter resets after the Anubis Wilds are released. Landing 3 or more scatters delivers a re-trigger and another round of 10, 15 or 20 free spins – there’s infinite extra free spins to be won.

The futuristic design in Ankh of Anubis is a big step up from some of Play ’N Go’s more pedestrian looking slots. What’s familiar here is the simple, volatile gameplay. The variance isn’t quite as stratospheric as some in the developer’s catalogue but it’s still fiery enough – saying that, you can win up to 15,000 times your stake on every spin or free spin.

If you like straightforward, high variance slots with an Egyptian flavour, then an audience with the Ankh of Anubis is recommended. Play ‘N Go has plenty of slot games with this theme – Book of Dead their most popular.