Recommended casinos to Play Spirits of the Valkyrie 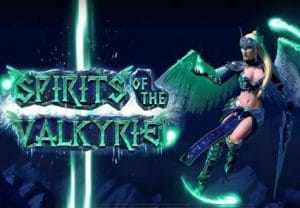 Sophisticated design and plenty of extras aren’t usually we something we find in a Novomatic-powered slot game but that’s precisely what’s on offer here. A wintry, mountainous forest is the setting here. On the reels you’ll find A to 10 symbols alongside swords, axes and hammers. Top of the standard symbols is the shield. Land 5 of these in combination for an award of 1.25 times your stake.

Helping your winning chances is the book of spells which is the wild. This offers payouts of up to 25 times your stake per payline. The winged Valkyrie watching over the reels can come to life at random on any spin and deliver 1 of the following modifier extras:

The modifiers aren’t the only extras on offer here. Land the bonus symbol on reels 1 and 3 and the free spins symbol on reel 5 and you’ll receive 10 free spins for the Free Spins feature. These are played on a win both ways game engine.

Win Stack feature - to activate this, you’ll need to land the bonus on reels 1 and 3 plus the Win Stack symbol on reel 5. To the left of the reels you’ll see 10 blocks. These are filled by the amounts of your 10 most recent wins. As a new figure is added at the top of the stack the amount in the bottom position drops out. Trigger the Win Stack and all the amounts in the stack are added together and that’s the amount you’ll win.

Free Spins and Win Stack feature - bonus symbols on reels 1 and 3 plus the combined Free Spins / Win Stack on reel 5 triggers this double whammy. You’ll first play out your 10 free spins. The total amount won is then added to the top position in the Win Stack. All 10 positions in the Win Stack are added together and then combined with your free spins win for your overall payout.

Well we weren’t expecting this when we fired up Spirits of the Valkyrie. The sound and visuals here are very nicely done and a big upgrade on many of Novomatic’s tired looking older releases. They’ve also packed in plenty of extras which delivers lots of variety and keeps the gameplay fresh.

The individual payout amounts aren’t massive but the modifiers and free spins come along regularly enough to keep things interesting. The Win Stack is a nice addition too. The medium variance means this isn’t as volatile as some Novomatic slot games. Even taking that into account, Spirits of the Valkyrie remains a very playable prospect. If you like the theme, Valkyrie by ELK Studios is my recommendation.