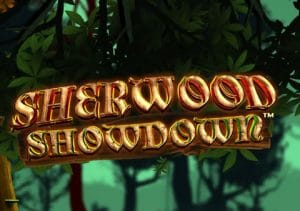 Sherwood Showdown isn’t your typical Novomatic slot. That’s certainly the case with the design which is a world away from many of the developer’s older releases. With the greenery of Sherwood forest in the background, the reels include A to 10 symbols plus members of Robin’s band of outlaws including Little John, Friar Tuck and Maid Marian. The shield is the most rewarding standard symbol, offering payouts of up to 15 times your stake per payline. That’s also the case with the wild which also substitutes for everything bar the scatter.

If the design is a little unusual for a Novomatic slot, so too is the gameplay. There are loads more extras than you might expect to find, starting with the collection of base game modifiers.

Land scatters on reels 1 and 3 and you could see the size of reel 5 increase from 3 up to 4 or 5 rows high. This gives you more chances to land the third scatter which activates the bonus round. This is called the Reel Rise feature.

Free spins with multipliers up to 5x

Land scatters on reels 1, 3 and 5 on the same spin to activate the Free Spins feature. The free spins in this round come with multipliers. The size depends on the symbol on reel 5 on the triggering spin.

Hope to see Robin make a random appearance and add extra free spins to your total or increase your multiplier award. The number of free spins awarded depends on the outcome of the Showdown. Here, Robin does battle with a wolf. If he wins, the free spins continue. If the wolf wins, the round ends.

Land a gold coin with 2x attached during the free spins and you’ll activate the Hold & Spin Streak feature. The 2x coin is held and the reels spin again. The respins keep on coming as long as a new coin symbol lands. When you’re out of respins, the multiplier values are combined to give you your overall prize. This can be a nice Brucie Bonus from a free spins trigger.

Not your typical Novomatic release

Novomatic has shaken things up a bit with the Sherwood Showdown slot. The design and gameplay are rather different from the usual fare served up by the Austrian developer. It works rather well though. The sounds and visuals are well crafted and the range of modifiers and features deliver plenty of action.

The variance is in the medium to high range and offers wins of 300 times your stake on each spin – trigger the feature with the King scatter on reel 5 to benefit from a 5x multiplier and potential 1,500 times stake payouts on each of them. Put all that together and Sherwood Showdown becomes a playable take on this classic folk tale. If you want to play a slot based on the infamous folklore hero, NetEnt’s Robin Hood: Shifting Riches slot is recommended.