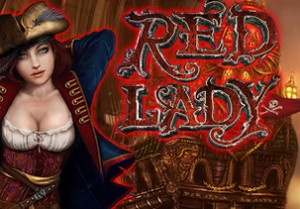 The imagery in Red Lady have a classic look - picture a 19th century painting rather than cartoon style visuals. Featuring a windswept sailing ship backdrop, symbols on the reels include playing cards from A to J, a parrot, a pair of pistols and a pirate ship.

The top paying symbol is the Red Lady herself - land 5 of these on a payline for a payout of 5,000 times your line bet. One nice thing about all of the pirate-themed symbols is that you only need to land 2 of them in a payline to bag a winner.

The golden compass is the game's wild, substituting for all other symbols. Whenever you land 3, 4 or 5 of the compass symbol, you'll also trigger the Free Games feature and be awarded 10 free spins. Before your bonus games play out, 1 symbol will be chosen at random to become the special expanding symbol.

When the payouts have been made after each spin, the special symbol can expand to cover 3 positions on the particular reel(s). It will pay out just like a normal symbol, even when the symbols aren't adjacent to each other. This feature can be found in other Novomatic slot games like Lord of the Ocean and the infamous Book of Ra Deluxe.

There are plenty of slots that offer seafaring adventure - Red Lady is a decent addition to the fleet. It's nicely designed (complete with the live casino style soundtrack typical of Novomatic slots) and comes with just enough in the features department to keep things interesting.

The variance is on the high side of medium so there will be times when your pillaging comes to nought but get stuck into the free spins with the special symbol and there's booty galore on offer. If you like pirate-themed offerings, Ghost Pirates by Net Entertainment, which is often overlooked, is a good option as to is Loose Cannon by Microgaming.