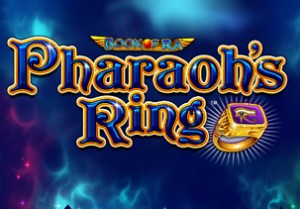 This sequel to the popular Book of Ra Deluxe slot has many of the elements that made the original a hit. Look out for the scarab beetle, Bast (the Egyptian cat god), the winged goddess and the Pharaoh himself who is the top payer - land 5 of the Pharaoh in a single payline and you'll win a prize of 5,000 coins. The Egyptian symbols are joined by playing card values from A to 10.

You'll notice that the game engine features 20 paylines but the minimum stakes are 25 coins - this is because of the extra bet option. Those extra few coins give you access to the extra wild on reels 2 and 4 that substitute for all other symbols including the bonus scatter and the special expanding symbol.

Land 3, 4 or 5 of the bonus scatter to trigger the Free Spins feature - here you'll be awarded 10 free spins complete with the special expanding symbol feature. 1 symbol will be designated - when it lands throughout the feature, it can expand to fill whole reels. It's certainly possible to fill multiple reels with the same symbol. If you're lucky enough to land a high value symbol and hit it in conjunction with the extra wild, then the results can be spectacular.

Visually, Pharaoh's Ring is typical of Novomatic - the symbols are all decently enough drawn but there's nothing flashy on show. It's solid rather than spectacular. The backing track is a typical disappointment though as it's the developer's regular ZX Spectrum style bangs and bleeps. As usual, it had us reaching for the mute button pretty sharpish.

The variance here is on the high side of medium with your best shot of landing a big one coming via the Free Spins feature. The expanding symbol can be lucrative in its own right but if you're lucky enough to combine them with the special wilds, then rewards fit for a Pharaoh are on offer if your luck is in. If you like expanding symbols, you should also try Novomatic’s other flagship title, Lord of the Ocean.