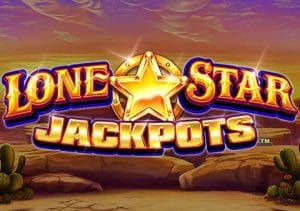 Set against a desert backdrop

A quick glimpse and you can usually recognise a Novomatic slot and Lone Star Jackpots has that unmistakable look. Other developers are slicker when it comes to design but the colourful imagery does the job just fine here. Set against a desert backdrop you’ll see an assortment of royals and animal symbols.

The American buffalo pays 1, 3 or 8 times your stake for 3, 4 or 5 in combination. There’s also a cactus which is the wild. As well as substituting for the standard symbols, itt can also trigger a feature. More on that below.

The gold coin is one of 2 bonus symbols. Land 3 of them on the same spin and you’ll receive 10 free spins in the Free Games feature. Boosting your chances here is a 2x multiplier which doubles all awards during the free spins.

Rather unusually, the Lone Star Jackpot Wheel feature is triggered by landing a full stack of cactus wilds on reels 2 and/or 4 on the same spin. You’ll then get 1 or 2 spins of the Bonus Wheel depending on how many stacked wilds were on the triggering spin. Spin the wheel to win a cash prize up to 10 x stake, entry to the Free Spins feature or a jackpot prize.

In addition to the coin, the star is the second scatter symbol. To trigger the Lone Star Jackpots feature, you’ll need to land 5 or more of them on the same spin. The stars are held and 3 bonus respins follows. If a new star lands, the respins revert to 3. Prizes are awarded once you’ve used up all 3 respins.

The goal is to fill all 15 reel positions with stars. In that happy event, you’ll trigger the Grand Jackpot to land a 200 x stake prize. If you miss out on fill all 15 positions, you can still land 1 of the other 4 smaller jackpots or even a consolation prize of 15 times your total stake. The other jackpots are worth 20, 30 or 50 x stake.

There’s nothing staggeringly original about this virtual trip to the heart of America. Other slots have better design than Lone Star Jackpots and you’ll have seen the features in plenty of other games. It’s not the most volatile slot you’ll see either with the variance in the medium range.

The combination of free games with a 2x multiplier, a spin the wheel bonus plus 5 potential jackpot prizes is an alluring one though with top wins of 500 x stake from each free spin. They’re all popular features and rightly so. If you enjoy Novomatic’s simple blend, then you should find plenty to enjoy in the straightforward but very playable Lone Star Jackpots.

If you want more volatile Wild West adventure, the iconic Dead or Alive II game by NetEnt is your only option!