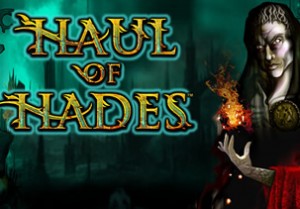 The imagery in Haul of Hades has a definite demonic feel - the reels are set against dark, Gothic style ruins and include stylised playing cards from A to 10 as well as a quartet of Greek Gods and Goddesses who frequent the underworld kingdom.

The visuals have an oppressive feel which is complemented by a brooding soundtrack. Each spin starts with what sounds like a sword being unsheathed which adds to the air of menace. Listen out too for the cracks and thunder and squawking birds which maintain the somewhat intense feel.
During each spin, 1 of the 4 main characters is chosen at random to be a giant stacked symbol - they appear on every reel and if they land in combination, can deliver some very impressive results.

Haul of Hades is a departure for Novomatic which is best known for its classic fruit machines - the sound and visuals are certainly a step up from the developer's norm, complete with slick animations and some creepy visuals. It all comes together rather nicely. It’s been developed in co-operation with Mazooma (part of the Novomatic Group) – you can tell.

It's not overloaded with features and the allocation of free spins isn't overly generous, but if you get a high value symbol as the stacker during the feature, it can deliver some tidy results. I found the variance to be in the middle with a steady stream of decent wins.

Fans of the ancient Greek genre will certainly want to take Haul of Hades for a spin - if the gods of the underworld work their magic, there are decent rewards on offer there too. If you like the theme, Golden Goddess by IGT and Zeus 1000 by WMS are good options.