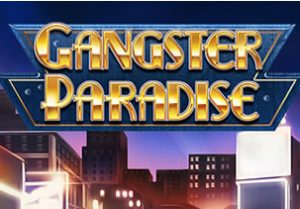 The attractions of a neon lit main street form the backdrop to the action in Gangster Paradise. On the reels you’ll see A to 9 royal values alongside a vintage car, a cop and a gangster’s girl. The mobster is the best of the standard payers, awarding a payout of 1.2, 4 or 12 times your total stake if you land 3, 4 or 5 on a payline.

The gun chamber full of bullets is the wild. This substitutes for all of the symbols apart from the scatter. Land 2, 3, 4 or 5 wilds in combination and you’ll pocket an award of 1, 2, 6 or 20 times your total stake.

Gangster Paradise comes with a Free Games feature - it has the potential to be a good one though. It’s triggered in the usual manner by landing 3 or more of the scatter (the detective’s shield) on the same spin. Hit 3, 4 or 5 shields in the same spin and your reward will be 7, 10 or 15 free spins.

Like most slot games in the Novomatic catalogue, there’s a little something extra lurking in the feature. Land a full stack of a standard symbol on a reel and it magically transforms into a wild. You could hit stacked symbols on more than 1 reel which can lead to stacked wilds on multiple reels with results to match. Land 2 scatters on the same free spin to get a re-trigger and another 5 free spins – this can happen various times.

Gangster Paradise is a simple but very playable slot game. The 1930s style visuals aren’t bad and the catchy soundtrack is a big improvement on some of Novomatic’s more generic scores. The gameplay here is straightforward too. The action can explode into life during the feature though thanks to the extra wilds. The variance here is in the medium range with top wins of 500 times your stake on each spin/free spin.

There’s nothing complicated about Gangster Paradise. It all comes together pretty well. If your list of favourite films includes The Godfather or Goodfellas, then this slot game should offer plenty of appeal. I also suggest you try Novomatic’s Chicago which is much more volatile and potentially a lot more lucrative.