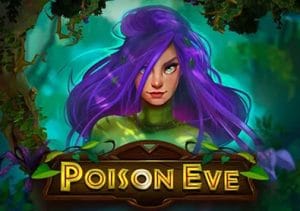 Head to a magical forest realm

The sound and visuals in the Poison Eve slot are nicely done. The reels are set within a wooden frame that’s covered in creepers. There you’ll find A to 10 royals as well as 4 higher paying bottles of potion. Poison Eve is the best symbol awarding 2, 5 or 100 times your stake if you land 3, 4 or 5 on a payline.

Being a traditional 20 payline game, you form winning combinations by getting matching symbols on adjacent reels starting from reel 1.

The vine symbol is the wild. This can appear on the middle 3 reels only and replaces all symbols (bar the scatter) as standard. When one hits, it expands to turn the whole of that reel wild. This is called the Expanding Vine Wilds feature and can lead to 3 fully wild reels on each base game spin.

The Liquid Magic feature is triggered by landing a fully stacked Poison Eve symbol on reel 1. All the potion symbols elsewhere on the reels transform into Poison Eve symbols and a new payout calculation is made. Fill the whole of the reels with Poison Eve for a payout of some 2,000 times your total stake.

On the middle position of reel 5 you’ll see a portal. Land a Bonus symbol in the portal position and you’ll activate the Flower Power feature. You’ll then be awarded between 3 and 12 free spins.

The symbol that lands in the middle position on reel 5 will expand to fill the whole of that reel as well as the portal that fills reel 1. If a matching symbol lands on any of the other 3 reels, it expands to fill that reel as well.

A payout calculation is then made depending on how many matching symbols are on each payline. They don’t have to be next to each other. For example, matching symbols on reels 1, 3 and 5 still results in a winner.

If a bonus symbol appears inside the Hot Zone, another portal is created which will also add more free spins to your tally.

The features in Poison Eve are a little unusual so if you get the chance, have a quick look in demo mode. They can deliver some pretty good action though, especially in the Flower Power feature where a good combination falling in the portal can deliver some big rewards.

Be warned though, this is a volatile game but has payouts to match – you can win up to 6,091 x stake. It’s a bit of a rip off of the comic book villain (Poison Ivy) but Poison Eve is a very good slot game. You should check out other Nolimit City slots with Dragon Tribe my favourite.