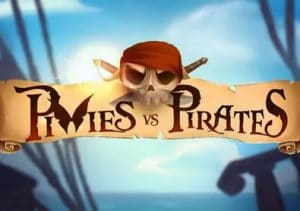 Like most slots from Nolimit City, the design in Pixies vs Pirates is nicely done. Joining the lower value A to 9 royals are 3 pirates and 3 pixies. The best of them are the gold pixie queen and the bearded pirate skipper who both pay 3 times your stake if you land 6 on adjoining reels. There’s plenty of scope to add to these, courtesy of the xNudge Wilds.

xNudge Wilds with multipliers of up to 6x

Wilds nudge up and down to fill whole reels when they appear. Each nudge increases a multiplier by 1x, up to a maximum of 6x. This multiplier is then applied to any winning combination that’s been created.

The treasure chest is a special mystery symbol that can morph into anything other than the wild or scatter. The chests can reveal up to 4 of the same symbol and take each reel up to 6 rows to offer 11,664 ways to win.

Land 3 or 4 scatters on the same spin and you’ll receive 6 or 8 free spins. Reels 2 through 5 are fully expanded for the duration of the spins to offer the maximum 11,664 ways to win.

Before the free spins begin, choose either the Pixie Queen or the Pirate Captain. If your chosen symbol appears more often than the other, you’ll get a retrigger and another round of free spins.

The theme might be slightly bonkers but there’s plenty of innovative gameplay on offer in Pixies vs Pirates. The pirate themed slot has been done to death but the extras available here make Pixies vs Pirates worth considering, especially if you like super volatile play.

With possible payouts of up to 11,907 x stake on every spin or free spin (with 11,664 ways to win), it’s all about the xNudge Wild expanding to increase the multiplier (up to 6x). A few spins in demo mode (above) will make sense though.

By the way, the xNudge and xWays Mystery Chests also feature in Dragon Tribe (by Nolimit City) which offers even bigger potential wins – up to 27,000 x stake.