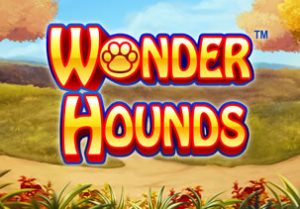 The design in Wonder Hounds is simple but rather tastefully done - with a woodland scene in the background, you’ll see lower value A to 10 playing cards (embellished with paw prints) spinning around the reels. They’re joined by a trio of higher value Wonderhounds.

They are a British hound called Winchester who pays up to 6 times your stake per payline, a Chinese dog called Jinse (which translates as Golden) who awards up to 12 times your stake and an American pooch called Ace. The Yankee pays 14 times your stake if you land 5 on a payline.

At the conclusion of any spin, any of the 3 Wonderhounds can magically transform into a wild. You can add 1 Wonderhound wild per reel. These come in addition to the standard wild which offers payouts of up to 16 times your stake per payline. This is known as the Wonderhounds Gone Wild feature.

The highlight of the gameplay is the Free Games feature which is triggered by landing 3, 4 or 5 paw print scatters on the same spin. As well as a payout of 4, 15 or 100 times your stake, you’ll also be awarded 8, 12 or 15 free spins.

Between 1 and 15 wilds are awarded before the free spins begin. Any wild that hits then or throughout the feature will be locked in place for the duration of the feature. Just like in the base game, 1 of the Wonderhounds can transform into a wild during the free spins too. The only downside here is that the feature cannot be re-triggered.

With all the puppies on show here, you could mistake Wonder Hound for being a gentle slot game. In fact, the volatility here is high. Expect plenty of lengthy winless runs. Get lucky with the sticky wilds in the free spins though and some excellent results are possible though – to the tune of 6,000 times your stake on each spin!

Wonder Hound is a pretty simple game. It’s all works rather well though. If you’re a dog lover you’d be barking mad not to give it a quick look at least. If you prefer cats, Not Enough Kittens by Thunderkick or The Cheshire Cat by WMS are suggested.