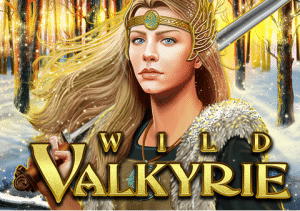 Superb design and GamesLab aren’t always found in the same sentence but the sound and imagery in Wild Valkyrie are from the top drawer. The setting is a snowy woodland. On the reels are A to 9 symbols (but no 10 bizarrely) as well as a goblet, a hunting horn, a raven and wolf. The white horse and the Valkyrie logo are the best paying symbols. Land 5 of these in combination and you can look forward to an award of 10 times your stake.

The Valkyrie of the title is the game’s wild. She replaces all other symbols and can appear in grouped formation on reels 2, 3, 4 and 5. There are a number of extras to get stuck into in Wild Valkyrie.

Morphed Symbols feature - land a winner and you could benefit from Morphed Symbols. New symbols take the place of the symbols that have morphed to offer another chance at creating a winning combination. You can land multiple morphs from a single winning spin. The first morph pays at 1x, each subsequent successful morph awards a 2x multiplier. The transformations keep on coming until there’s one where no new winner is created.

Valkyrie feature - to the left-hand side of the reels, you’ll see the Wild Tally meter. Each wild that lands (including any that morph) fills the meter. If you land 6 or more of them on the same spin and series of morphs, then you’ll trigger the feature. The more wilds collected, the greater the number of free spins on offer.

This starts at 8 free spins for 6 wilds but can reach 100 free spins if you manage to amass 16 or more wilds. Re-triggers are possible too. Collect 6 wilds and another 5 free spins are added to your total – with no limits. The Wild Tally meter resets to zero at the start of each new base game or free spin. The morphing feature is in play during the free spins too. Each morphed payout comes with a 2x multiplier boost attached.

We were pleasantly surprised by Wild Valkyrie. It looks and sounds superb. GamesLab have got the balance between simplicity and features just about right here. It’s medium variance with top wins of 500 times your stake on every spin or free spin with a 2x multiplier.

The Norse theme has been a big hit with players and developers. Wild Valkyrie is a welcome addition if you like this myth and legend theme. If you fancy more of the same theme, Vikings Go Berzerk from Yggdrasil Gaming would be my choice.