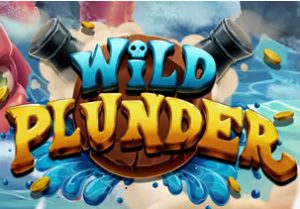 The design here is rather good. The reels feature 4 lower value coins symbols. Each of these offers payouts of up to 2 times your stake per payline. Next come the flagons of ale and the treasure chests which award up to 6 times your stake followed by the ghostly pirate pays up to 12 times your stake. The top standard symbol is the octopus who’ll get you 14 times your stake if you land 5 on 1 of the game’s 25 paylines.

Jolly Rhonda is the game’s wild. She replaces all other symbols and delivers payouts of 16 times your stake per payline. NextGen Gaming has packed a good selection of extras into Wild Plunder.

Wild Currents feature - this can trigger at random on any base game spin. The globe behind the reels will then spin rapidly. Hope to see one of the islands land above reel 3 as this adds between 3 and 9 wilds to the middle 3 reels. A new calculation then takes place with the extra wilds in place.

Rhonda’s Re-Spin feature - this can trigger at random when you land 1 Jolly Rhonda wild. The wild is held and you’re awarded 1 re-spin to give you another shot at entering the Wild Spins feature.

Release The Kraken feature - this extra can also trigger at random in the base game. The kraken can explode onto the reels and replace 1 or more symbols with Jolly Rhonda wilds. Again, this can lead to the Wild Spins feature being activated.

The pirate theme remains a popular one with players and Wild Plunder is a pretty good example why. Visually, it’s very well done. Likewise, the jaunty jig playing in the background. The range of extras offers something a little different too. There isn’t a traditional free spins round but the wild spins are a perfectly acceptable substitute.

Saying that, you can only win 400 times your stake on each spin/wild spin so it’s a low to medium variance affair. If you enjoy some swashbuckling pirate adventure and want bigger win potential, Red Lady from Novomatic and Pirate’s Charm from Quickspin are recommended.