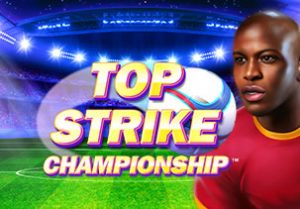 With a football pitch and packed stands in the background, you’ll see lower value A to 10 playing cards spinning around the reels alongside a trio of players. The best payer is the Top Strike Championship logo which awards 75 times stake if you land 5 on a payline. Even bigger rewards are on offer from the wild (the I can’t believe it’s not the World Cup logo). Land 5 of these on the same payline and you’ll pocket 125 times stake.

The golden trophy is the scatter - land 3, 4 or 5 of these anywhere on the same spin and you’ll trigger the Free Games feature. Here you can look forward to 10, 15 or 20 free spins. These feature extra symbols and a slightly amended paytable.

Look out for the special golden tickets that can land on reel 5 during the free spins and trigger the Treble Bet Bonus feature. You’ll be offered 3 international matches - pick which team you think will win in each of them. A prize is awarded for each winning team you select. If you pick all 3 winners, then you’ll progress to the Knockout Stage Bonus feature.

The goal here is to pick a winner in each of the 4 rounds. If you pick correctly, you’ll go through to the next round. Cash prizes are awarded in each match. If your team doesn’t win, you’ll return to free spins and play out whatever free spins you have left. You can retrigger the Treble Bet Bonus feature multiple times within the same free spins round.

The visuals here are solid enough but lack the wow factor you’ll see in games from some developers. You’ll also hear blasts from the ref’s whistle and roars from the crowd as you spin which certainly adds to the atmosphere.

The gameplay is pretty simple with the best action coming via the Free Games feature. The Treble Bet Bonus and Knockout Stage Bonus features offer a fresh take on the classic pick me round.