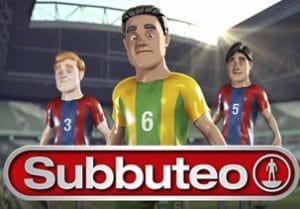 The design here is simply done - the reels are set within a Subbuteo stadium, complete with crowd. Joining the lower value royal values are boots, balls, whistles, trophies and Subbuteo players. The best of them is the gold Subbuteo Sub who pays 5, 25 or 250 times your stake if you land 3, 4 or 5 on a payline. There’s also a wild that performs the usual substitution functions as well as offering awards of up to 100 times your stake per payline in its own right.

Underneath the reels you’ll see a team of 11, silhouetted Subbuteo footballers. Every time a symbol lands that features a club badge (which you can customise before playing), then 1 of the players turns active. Once all 11 players are active, you’ll trigger the Subbuteo Free Spins feature.

After you’ve collected 7 players you can pay a fee and immediately trigger the feature. Once the full team is activated, you’ll be awarded 18 free spins which are equal to 90 minutes. Boosting your chances here are a selection of extras:

A special bonus prize is awarded if your team wins. If the scores are level when the full-time whistle blows, you’ll trigger extra time and with it 6 extras free spin. If it’s still a draw after extra time you’ll go to penalties where each successful kick awards a 5 times stake bonus payout.

Subbuteo also comes with base game extras that can hit on any spin:

It might all sound a little complicated but Subbuteo is actually pretty simple. It can take a while to trigger the Subbuteo Free Spins feature but the extras there can deliver. The base game modifiers can help move things along too. We managed to land a payout of 100 times our stake after landing a New Contract. It does offer up to 1,250 times your stake on every free spin which is decent.

You’ll certainly see flashier looking slot games than this and the commentary had us reaching for the mute button. It feels a bit messy but there are some decent extras on offer here. If you’re a fan of the beautiful game, I recommend you try Top Trumps Football Stars: Sporting Legends from Playtech or Bicicleta from Yggdrasil Gaming.