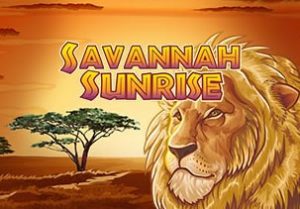 The design in Savannah Sunrise is done cartoon style. With the savannah in the background, you’ll see colourful A to 10 royal values alongside a selection of wild animals. The monkeys and zebras offer payouts of up to 8 times your stake. Better still is the giraffe which pays up to 20 times your stake. The best symbol is the mighty elephant who’ll get you 200 times your stake if you land 5 on adjacent reels. Appearing on reels 2 and 4 only is the lion which is the wild. More on this shortly.

The Free Games feature is triggered when you get 3 or more of the tree scatter from left to right on the same spin. As well as a payout of 4, 15 or 80 times your stake, you’ll also be awarded 20 free spins. It’s during these free spins that the wild lion can really come into its own.

Land a win that includes a wild on reel 2 and the payout receive a 3x boost. Land a winner with the lion wild on reel 4 and the multiplier on offer increases to 5x. The ideal scenario is landing a winner that includes wilds on both reels 2 and 4 - in that happy event, your payout will rocket by a massive 15x! It’s possible to retrigger more free spins here too with 40 available.

Savannah Sunrise is a very simple game. The imagery isn’t the best you’ll see but does the job well enough. Likewise, the soundtrack which offers only a hint to the safari theme (in the base game at least). The gameplay is equally straightforward.

The best winning potential comes via the Free Games feature where the multipliers can quickly work their magic. This is quite a volatile slot game with payouts of 7,815 times your stake on every free spin involving a 15x multiplier - expect some swingy action.

There’s nothing complicated about Savannah Sunrise but it’s none the worse for that. If you fancy a simple, slot game safari then you won’t go too far wrong here. If you like the African plains, African Simba from Novomatic is a good game to play.