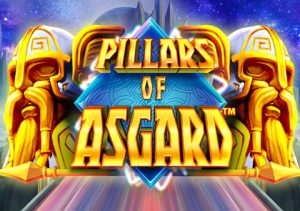 A Norse saga deserves epic design and that’s just what you’ll find in Pillars of Asgard which looks and sounds superb. With the cloudy skies of Valhalla in the background, the reels are flanked by the twin pillars of Asgard. There you’ll find Norse-style playing card values as well as higher value emblems, motifs and weapons. The visuals are terrific and backed by a sweeping orchestral score. No complaints here then. What of the gameplay?

Wild Multipliers up to 10x

Odin is the wild symbol. This substitutes for all standard symbols. Land a wild in a winning combination and it also delivers a multiplier boost of between 2x and 10x with the Wild Multiplier feature. The more wilds in the winning combination, the higher that multiplier is guaranteed to be. For example, land 6 wilds and the multiplier will be 8x or 10x.

Land 3 or more of the gold crown scatter on the same spin and you’ll trigger the Free Games feature and with it, 20 free spins. These play out on an extended set of reels. The more scatters on the triggering spin, the more rows added and the more ways to win are active.

You can expect those reels to get even bigger during the free spins with the Reel Rise feature. Each time a scatter lands during the free spins round, it increases the size of that reel by 1 row, up to a maximum of 10 rows. If all 6 reels reach their maximum size, you’ll have 1 million ways to win!

When a reel reaches its maximum height of 10 rows, you’ll trigger Odin’s Blessing Bonus feature – you’ll then receive 5 extra free spins. Each scatter on that reel also turns into a wild and will remain wild for the remainder of the round.

Odin awakens if you manage to get all 6 reels to their maximum 10 row height. Called the Rise of Odin Bonus feature, a wild stack then fills 1 of the reels moving to a new reel on each free spin you have left.

If you don’t want to wait to trigger the Free Games feature, you’ll be given the opportunity to buy it for 80 times your total stake with the Buy Pass feature. You can also take a gamble and spin a bonus wheel and try and trigger it that way – called the Take a Chance feature. The precise amount this will cost varies depending on how much of the wheel will result in a trigger and what portion is a loss.

A slot game that offers the chance of 1 million paylines plus wild multipliers, wild reels and sticky wilds was always likely to be a volatile one and Pillars of Asgard doesn’t disappoint. This is an extremely high variance game so be warned. You can however win up to 25,000 times your stake on every free spin!

NextGen Gaming has pulled out all the stops with Pillars of Asgard. Despite all the moving parts, the design here is fantastically well done. The gameplay matches the stunning design. Add the massive volatility into the mix and this is one of the top Norse-themed slot games you’ll ever see!