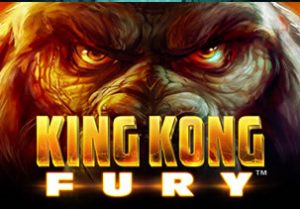 A lush, tropical jungle forms the backdrop the reels in King Kong Fury - you’ll see lower value A to 9 symbols spinning around the reels next to 5 higher value dinosaurs. Appearing on the middle 3 reels only, Kong is the wild. He doesn’t offer any payouts but does replace everything bar the scatter.

Kidnapped actress Ann Darrow is the scatter - she appears on reels 1 and 5 only. When she hits on both on the same spin, you’ll trigger the King of Skull Island Free Games feature. Spin the statue reels to see how many free spins you’ve been awarded. This can be anything between 9 and 100.

Also in play during the feature is the Raging Re-Spins feature - these are triggered by landing a full stack of wilds. A re-spin is awarded with the stacked wild locked in place. Land another stacked wild and it too is held and you’ll get another re-spin. Re-triggers are possible here too giving you unlimited free spins.

The free spins aren’t the only goodies on offer in King Kong Fury. There are also 2 modifiers that can trigger at random in the base game or King of Skull Island Free Games feature:

The visuals here are nicely drawn but there’s a camouflage feel to the imagery which makes it slightly tricky to identify what’s what. The features offer a nice variety - you can expect to land the modifier extras regularly. Both the Lightning Reel and Kong’s Call deliver steady action.

The King of Skull Island Free Games feature is naturally harder to find. Land a good number of those then combine with the modifiers and wild re-spins and some explosive results are possible. The variance here is in the medium to high range with potential payouts of 12,500 times your stake on every spin/free spin/re-spin!

NextGen Gaming released their first King Kong slot game a decade ago. This updated version is an impressive all-rounder and provides an entertaining update to a popular original. I would also recommend you try Gorilla Go Wild, by NextGen Gaming.