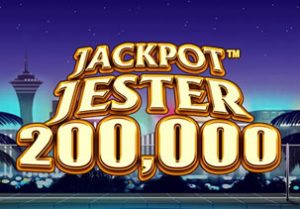 There’s a glossy feel to the design in Jackpot Jester 200,000. With the bright lights of Las Vegas in the background, you’ll see a selection of classic fruity symbols spinning around the reels. Your first decision will be whether to play at stakes of 10 or 20 coins per spin. We’d go for the 20 as this brings the Super Game feature into play.

Winning combinations are created by landing 3 matching symbols in 1 of the game’s 5 paylines. You’ll see cherries, lemons, plums, strawberries, diamonds and bells spinning around the reels. The lucky 7 is the best payer, awarding 20 times your stake if you land 3 in a row. The female jester is the wild. Land 3 of her on a payline and you’ll pocket an award of 100 times your stake.

You can bank any winning you accumulate during the Super Game feature whenever you like by pressing the collect button to the left of the reels. If your Super Game feature balance drops below 5 times your stake then you’ll return to the base game.

It took us a little while to get used to the slightly unusual gameplay here. There’s a lot to like about Jackpot Jester 200,000 when you have got accustomed to it though, especially the Super Game feature. This is an extremely volatile game and should be approached with a degree of caution if you’re trying to eke out a limited bankroll. If you enjoy simple, high variance fruit machines then Jackpot Jester 200,000 ticks all the right boxes.