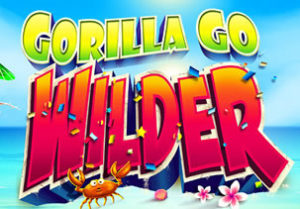 Just like King Gary’s first outing, Gorillas Go Wilder is a colourful, light hearted game. The setting is a beautiful tropical beach flanked by palm trees. On the reels you’ll see A to 9 royal values plus raccoons, birds and baby monkeys. The gold coin featuring Gary is the top paying standard symbol. Land 5 of these for a payout of 33.33 times your stake.

Gary the gorilla is the wild. He replaces everything bar the scatter and pays 50 times your stake if you land 5 in combination. In the base game, Gary can randomly trigger the Gary’s Gifts feature which gives you access to the free spins features below.

The island is the bonus symbol. Landing 3, 4 or 5 of these anywhere on the same spin results in a payout of 4.16, 8.33 or 83.33 times your stake. They also trigger the Bonus Islands feature. Once active, you’ll be able to choose any of the unlocked bonus features. The more times you trigger the feature, the more of the features are unlocked. All the features award 10 free spins which can be re-triggered:

Gorilla Go Wilder also comes with a Shell Re-Spins feature which can strike following any base game win. As long as a new shell symbols joins the winning cluster, the re-spins continue. The more times you’ve triggered the re-spins, the more rewarding the shells in play. A final payout calculation is then made once no new shell joins the cluster.

The theme here is rather silly. That’s matched by the cartoon graphics and the soundtrack that has just a hint of the Caribbean. King Gary can deliver some pretty serious action though, especially once you’ve triggered the feature enough times to unlock the more explosive features – such as the Lava Lines Bonus and Multiplier Zone Bonus features.

We didn’t really think that King Gary warranted a sequel. Gorilla Go Wilder is an entertaining slot game though. It’s certainly worth heading down to the beach for an audience with his majesty as you can win 37,500 times your stake on every free spin with the 25x multiplier from the Multiplier Zone Bonus feature. If you fancy heading to the beach, Sam on the Beach by ELK Studios is my pick.