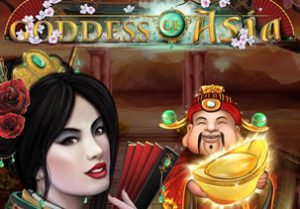 There’s a classical feel to the design in Goddess of Asia. With sunlit seas, mountains and blossom trees in the background you’ll see lower value royal values and traditional Chinese-style objects spinning around the reels. In order of value are a cat, gold bars, a dragon mask and red money envelopes. Land 3, 4 or 5 of those envelopes and you’ll receive up to 5 times your stake.

The Goddess is the game’s wild. She replaces all other symbols apart from the fan and the scatter. Whenever the wild forms part of a winning line with, the standard symbols the payout gets a 2x multiplier boost. The wild also offers awards of up to 6.66 times your stake in its own right.

Land a fan symbol on reel 2 and the Reel 2 Fan feature triggers - it awards a multiplier to any winnings from that spin. If you land a fan on reel 3, the Reel 3 Fan feature is activated - a re-spin is awarded with a stacked wild/wild reel guaranteed on 1 of the reels.

The main bonus round, the Free Spin Bonus feature, is triggered by landing 3 of the gold nugget scatter on the same spin. You’ll first receive a payout equal to double your total stake. Then pick 3 of the 9 envelopes to reveal how many free spins you’ve been awarded – this can be anything up to 15.

During the free spins, the fan symbol acts as an accumulator. Every time it hits anywhere on the reels, it’s collected. At the end of the feature, your total win is multiplied by the number of fans collected.

Goddess of Asia in an enjoyable take on a classic slot theme. The traditional visuals are well done and the gentle soundtrack is a nice fit. There’s a good selection of extras on offer here too which makes this a solid pick if you like plenty of variety from your features – there’s also wins of up to 6,000 times your stake on each free spin.

We were pleasantly surprised by what we found in Goddess of Asia. Well designed and with some interesting extras, it’s an enjoyable take on the ever-popular oriental theme. If you like goddesses, I recommend Age of the Gods Goddess of Wisdom from Playtech which is based on Athena.