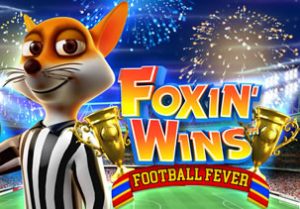 Just like the other slot games in this series, there’s an anarchic feel to Foxin’ Wins Football Fever. With the packed stands of a football ground in the background, you’ll see lower value A to 9 playing cards spinning around the reels next to rolls of cash, a trophy-style snow globe and a couple of pups playing in front of Foxin’s mansion. The best of the standard symbols is a car decorated in team colours - land 5 of these on a line and you’ll pocket 40 times your stake.

Foxin’ himself is the wild - he can appear on all reels and replaces everything bar the scatter. Land 5 of these on a payline and you’ll win 80 times your stake. Fox pups can appear within symbols on the middle reel and turn them wild too.

You can add to the number of wilds in play by activating SuperBet feature - add an extra 10 coins per spin and you could see the fox pups land on reels 2, 3 and 4. Up your stakes by an extra 25 coins per spin and these wild pups can hit on all 5 reels.

There are 2 other main extras on offer in Foxin’ Wins Football Fever. You have the Random Bonus feature which, as its name suggests, can hit at random on any spin. Random bonuses prizes are awarded depending on the result of the Fox Funds or Leprechaun Shakedown.

Then you have the Free Games feature - land 3, 4 or 5 scatters on the same spin and you’ll pocket a payout of 5, 15 or 100 times your stake. You’ll also receive 10 free spins where all payouts are doubled. Expect to see more fox pup symbols during the feature. Re-triggers are possible too.

NextGen Gaming has kept to a similar formula as the previous Foxin’ slot games in Football Fever. It’s a supremely silly game that comes with bright and bold cartoon visuals and an anarchic soundtrack. Behind the rather ridiculous facade are some serious features which can deliver plenty of action – to the tune of 2,000 times your stake on each free spin.

Despite its title, Foxin’ Wins Football Fever owes little to the so-called beautiful game. Soccer lovers may be a bit underwhelmed here. If you enjoyed the brand of mayhem delivered in the previous Foxin’ slot games then you should find plenty to enjoy here. If you want something better, Bicicleta from Yggdrasil Gaming should hit the back of the net.