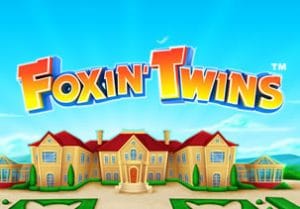 The design here is done cartoon style and works rather well. With Foxin’s stately home in the background, you’ll see A to 9 royal values plus bottles of champagne, gold gates, a private jet and Mrs Foxin’ riding a horse.

The best paying symbols are the 2 wilds, both of which feature Foxin’ looking like a country squire. They pay 20 times your stake if you land 5 on a payline. There are blue and green wilds. The blues are standard wilds. The greens can come with multipliers attached.

You’ll notice that the action takes place on 2 separate reel sets. They spin independently and each offer 25 paylines. There are plenty of extras on offer in this country jolly:

Foxin’ Twins is all about the Team Pup Free Games feature - this round is triggered by landing 3 or more scatters across both sets of reels. The more scatters, the larger the haul of free spins:

Land a 5 of a kind winner during the feature and it pays both ways. You can land both of the random extras throughout the feature too. You can also retrigger the feature to give you up to 200 free spins in total.

On the Right Reels the size of the multipliers on offer from the green wilds increase if SuperBet feature is active. With it inactive, the green wilds can deliver boosts of 2x, 3x or 5x. At level 1, those numbers increase to 3x, 5x or 10x. Play at level 2 and the potential wild multipliers are 5x, 10x or 20x. Stakes with SuperBet off are 25 coins. To activate SuperBet levels 1 or 2 will set you back 50 or 100 coins respectively.

Despite the number of reels in play, the design here is still nice and clear. The madcap feel to the gameplay we found in the previous slot games in this series is present and correct here too. The theme won’t be for everyone. Foxin’ Twins offers plenty of variety on the features front, especially if you have the bankroll to play with SuperBet feature active.

NextGen Gaming’s cheeky fox isn’t to all tastes. If you liked the other slot games in the series, then expect more of the same here. Saying that, the potential for 20x multipliers on each spin/free spin can lead to wins of 20,000 times your total stake! For this reason alone, Foxin’ Twins is the best in the series. If you want volatile offerings, the cult favourite 300 Shields, by NextGen Gaming, is a must.