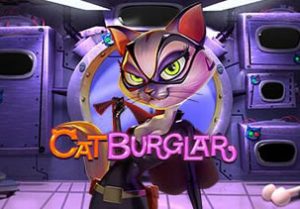 A museum packed full of artefacts and dinosaur bones forms the backdrop to the action here. On the reels you’ll see lower value A to 9 royal values as well as a necklace, the museum, a museum worker and a security guard who’s the top payer, awarding up to 12 times your stake per payline.

The cat burglar is the wild. She appears on all 5 reels and replaces everything bar the scatter. The onyx cat statue is the scatter. Land 3 or 4 of them on the same spin and you’ll activate the Feature Trigger Re-Spin feature where you’re award with a re-spin.

Land another scatter and another re-spin is awarded. After the re-spin is complete, you’ll go on to play the Vault feature. You’ll then be shown 5 vaults and a keypad. Each vault is opened by a 1, 2, 3, 4 or 5 digit code. Depending on the number of scatters from the triggering spin, you’ll be awarded 4, 5 or 7 numbers from the 10-digit keypad.

As you’d expect given the potentially enormous number of free spins and multipliers on offer, the variance in Cat Burglar is high. This can lead to wins of 8,000 times your stake with the 16x multiplier!

The cartoon visuals are nicely done and there’s a cops ‘n’ robbers style soundtrack that is a good fit for the theme. Unlocking the vaults can be a real hit and miss affair. Your code cracking will likely be unsuccessful most of the time. Watch out then you do open the vault though as the high number of free spins and the big multipliers on offer can quickly deliver a big score.

This heist themed slot game is an enjoyable one. If you like a good old crime caper them Cat Burglar should appeal. I also recommend you try Claws vs Paws from Playson which has a similar theme.