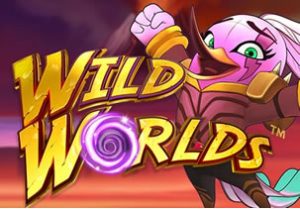 As usual for a Net Entertainment title, the design here is rather good. To the left of the screen you’ll see the 3 bird superheroes tapping away at their computers at the top of a skyscraper. The reels are to the right.

The top payer is the black stone edged in gold which awards 5, 25 or 50 times your stake for a 3, 4 or 5 symbol combination. Those same payouts are on offer from the wild which replaces everything apart from the scatter.

The action takes place using Avalanche reels. After a winning spin, the successful symbols are replaced and new ones drop in and replace them. These keep on coming as long as a new winner is created. The gameplay in Wild Worlds is quite unusual.

Hero Wilds feature - land a winning combination featuring of 1 of the 3 Hero symbols and all the other matching symbols elsewhere on the reels turn wild.

Destroy feature - this can trigger at random on any winless spin. 1 of the superheroes to the left of the reels will spring to life and let out an Incredible Hulk-style roar. All symbols the same colour as the superhero are destroyed and a new avalanche takes place.

Land 3 of the scatter symbol on the same spin and you’ll trigger the Free Spins feature - on offer here are 8 free spins. You’ll then spin a wheel to see which wild extras you’ve been awarded. It’s here that things get a little complex. The superheroes do battle with a series monsters - defeat a monster or find their weak spot to trigger the wild extras.

There’s also the Hero Attacks feature. Land a winner made up of 1 of the superhero symbols and it will help charge their associated meter. Once full, you’ll trigger a Hero Special Attack. The Heroes then attack monsters and land damage points when they strike a monster. There are 2 types of monsters.

You’ll need to find 15 damage points to destroy the 3 Captains and, in the process, trigger the Free Spins feature with the corresponding extra. To destroy the Boss requires 105 damage points. On offer here is a round of 8 free spins and more captains.

The gameplay here is very unorthodox and really rather complicated. This definitely requires a good few goes in demo mode to have a clue what on earth is going on. It certainly takes some getting used to but the wild extras on offer with the free spins aren’t bad.

This is about as far away from a classic fruit machines as you’ll get. If you’re looking for something fresh and unusual, then you’ll find just that in Wild Worlds which certainly lives up to its name. The only downside is that it’s low to medium variance with top wins of just 250 times your stake on each spin/free spin. If you want something a little simpler and with bigger potential wins, Vikings and Halloween Jack from Net Entertainment are worth playing.