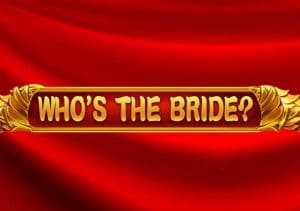 There’s a traditional feel to the design in Who’s the Bride. Like many similarly-themed slot games, red and gold dominate the colour scheme. A room flanked by lanterns and red curtains is the setting. There you’ll find A to 10 royal values as well as a selection of objects traditionally associated with the Sino theme.

They include tea pots, fans, slippers and jewellery boxes. The best of them is the ornately designed red and gold tent which pays 111.11 times your stake if you land 5 in combination. The mysterious woman behind the red curtain is the wild. She replaces all the standard symbols. Land 5 wilds on a line and you’ll receive an award of 166.66 times your stake.

The golden pot is the scatter. Land 3, 4 or 5 of these anywhere on the reels on the same spin and you’ll get a payout of 4, 25 or 2,500 times your stake. You’ll also trigger the Free Spins feature and with it, 12 free spins. All payouts in the feature come with a 2x multiplier which doubles the payout. Joining the action here are 5 potential bride symbols. These are sticky wilds. When 1 lands, it remains locked in position for the rest of the round. Land a wild bride on all 5 reels and you’ll get a re-trigger and another round of 5 free spins.

There’s a genteel feel to Who’s the Bride. The visuals are simple but nicely drawn and backed by a lovely backing track. The gameplay is generally pretty simple but the action can really sparkle in the Free Spins feature where the sticky wilds and 2x multipliers can really come into their own. There’s up to 3,000 times your stake to be won from each free spin!

The theme is an unusual one and one that is likely not to be to all tastes. If you like all things Chinese though, then Who’s the Bride is a potentially interesting proposal. If you like sticky wilds in the Free Spins feature, look no further than Dead or Alive II (by Net Entertainment) which can give you wins of up to 40,500 times your stake per free spin.