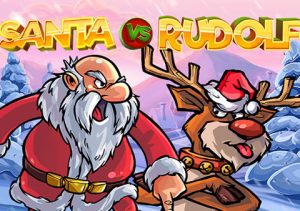 Santa vs Rudolf is a bright, colourful slot game. With a wintry, Polar scene in the background, the reels include candy style A to 10 symbols as well as letters, snow globes, Rudolf’s collar and a sack full of presents. Santa’s sleigh is the best standard symbol. Land 3, 4 or 5 of these for a payout of 1, 7.5 or 25 times your total stake. Watching over proceedings to the left and right of the reels are Santa and Rudolf, who both look like they’re nursing a hangover.

Both Rudolf and Santa are wild. In the base game, they appear on reels 1 and 5 respectively. Land a Rudolf wild and a series of re-spins follow with Rudolf walking 1 reel to the right on each of them. The same happens with Santa on reel 5, except he walks to the left. A new payout calculation is made with each free re-spin. This is called the Wild Re-Spins feature.

If Santa and Rudolf symbols collide on the reels, then you’ll trigger the Free Spins feature. Here you’ll receive 10 free spins (20 or 30 if you have 2 or 3 collisions on the same spin). The walking Santa and Rudolf wilds can land anywhere during the feature, not just reels 1 and 5. Each time they collide, 4 more free spins are added to your total.

Meters above the reels

Above the reels during the free spins you’ll see a couple of meters. Each time a Santa or Rudolf wild appears then moves off the reels, it lights up part of its associated meter. If all 8 lights are illuminated, you’ll trigger the bonus feature which follows at the end of the free spins.

If you fill Rudolf’s meter, you’ll play the Rudolf Spins feature – here, you’ll receive 3 free spins with 5 Rudolf wilds added on each of them.

The Santa’s Gifts feature is played when you fill Santa’s meter in the free spins – it’s a pick me round. Pick 1 of the 5 objects shown. You could find a coin win or a multiplier of 2x, 3x or 4x. Choose until you find Santa’s hat which brings the round to a close. All the coin wins are added together, boosted by any multipliers you have collected. It’s possible to win 188 times your stake in total.

The Santa vs Rudolf slot isn’t a schmaltzy take on Christmas. There’s an anarchic feel to the design and the cranky Santa and Rudolf appear like The Odd Couple. There’s still plenty to like though, especially if you manage to trigger the Free Spins feature where the walking wilds come thick and fast. Variance wise it’s in the middle with potential wins of 1,00 times your stake on every spin, re-spin or free spin – by getting a screen full of Santa’s sleigh/wild symbols.

If you want a festive-themed slot that offers something very different, then Santa vs Rudolf is a good place to start. Alternatively, Quickspin’s Polar Paws would be my recommendation as it offers bigger potential payouts.