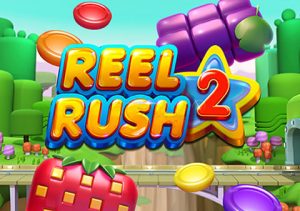 The design here looks like a spin off from the Teletubbies. A blocky cartoon landscape forms the backdrop to the reels. There you’ll find 10 brightly coloured sweetie-style symbols. The best is the strawberry sweet which pays 0.5, 2.5 or 8 times your stake. There’s also a wild that can land anywhere apart from reel 1.

You’ll notice that some positions on the reels are blocked. Land a winner and you’ll trigger the Re-Spins feature – you’ll then get a re-spin and blocked positions will open. This increases the number of ways to win. The more successive wins, the more positions open. If they reach their maximum, you’ll have 3,125 ways to create a winner.

Beneath the reels is a railway track. On each spin, 3 carriages appear. Each one could carry a special modifier. Up to 3 modifier extras can appear on each spin:

Each time 2 symbol positions are unblocked, a star is added to the meter to the side of the reels. When the meter is full, the Free Spins feature is activated. You’ll then be awarded 8 free spins.

Open a blocked position and it also adds between 1 and 5 Super Tokens to the meter. If you have 2,000 of these, you’ll be able to open up the Super Free Spins feature. This brings a progressive multiplier into play which increase by 1x with each win you hit. You can gamble to collect Super Tokens when you trigger the free spins if you wish.

Reel Rush 2 is a strange little slot game. The childish sound and visuals left us feeling a little uncomfortable. The gameplay is unusual but can deliver a decent amount of variety thanks to the selection of modifiers that can strike on any spin.

The multipliers in the Super Free Spins feature can have an impact too. If you’re idea of a perfect afternoon is the Gene Wilder version of Willie Wonka, then Reel Rush 2 will probably appeal. Medium to high variance though, you can win a cool 5,000 times your stake on every super spin if the multipliers work their magic.