Recommended casinos to Play Planet Of The Apes 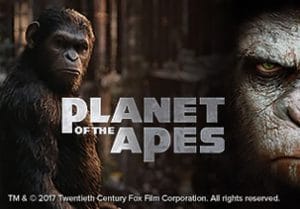 Each side has its own wild which pays up to 600 coins per payline as well as its own scatter. If the wild appears stacked on a reel in the Rise area, the Stacked Wild feature comes into play where the stacked wild duplicates onto the corresponding reel in the Dawn area. With regards to features, there are plenty to benefit from:

Rise Bonus feature - this is triggered by landing the Rise Bonus symbol on the first reel. Here you’ll receive an extra instant coin win on all human and ape symbols with up to 79.5 times your total bet available.

As you’d expect from a Net Entertainment movie tie-in, the design here is very good. The reels contain imagery from the 2 films which is very crisp and clear. The 2 reel sets take a little getting used to - once you have got accustomed to the unusual set-up, there’s plenty to like here, especially if you enjoy a good variety of features in your play.

The recent re-boots breathed new life into the Planet of the Apes franchise. With its high-spec design and range of extras, the slot game version does much the same. It’s medium to high variance with maximum wins of 3,000 times your total stake on each Dawn Free Spin (due to the 5x multiplier). If you like slot games based on movies, Jurassic World by Microgaming and RoboCop by Playtech are recommended.