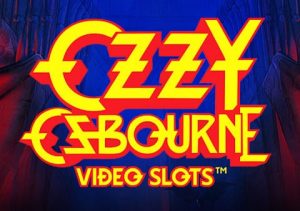 Simple visuals and a rocking soundtrack

The visuals in the Ozzy Osbourne slot are done in a simple cartoon style. The lower value playing card suit symbols feature roses, crucifixes, skulls and ravens. More rewarding are the 4 symbols that feature a cartoon Ozzy. The best of these pays 4, 12 or 50 times your stake if you land 3, 4 or 5 on a payline. The devil bat is the wild and replaces all symbols bar the scatter.

The main feature is the Free Spins feature. It’s triggered by landing scatters on reels 1, 3 and 5 on the same spin. You’ll then receive 4 free spins complete with Symbol Charge Up extras. Play with Bonus Bet active (which doubles your stake from 20 up to 40 coins per spin) and the number of free spins increases to 5. The potential from the Charge Ups increases too. If you get a scatter that is charged, you’ll get 1 more free spin – up to 7 in total.

If you just miss out on triggering the feature by landing 2 scatters, you’ll be offered a re-spin in the Re-Spin feature, complete with a Symbol Charge Up.

Before any re-spin and prior to every free spin, the Symbol Charge is activated. 1 symbol is picked at random. The Feature Spinner will then determine what modifier will be applied to the chosen symbol:

The rather creepy cartoon visuals and heavy metal backing track is just what we expected from Ozzy Osbourne. The gameplay is a little unusual though. The Symbol Charge Ups can deliver some cracking action, especially in conjunction with the free spins. The top payouts here stand at 2,500 times your stake per free spin with the multipliers that can combine up to 12x.

Ozzy’s music won’t be to all tastes. Even if you’re not a fan, the unorthodox gameplay makes it well worth arranging an audience with the Prince of Darkness. Other music inspired slot games include the superb Danger! High Voltage from Big Time Gaming.