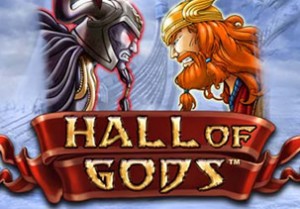 The 5 reel, 20 payline Hall of Gods offers not one but three progressive jackpots which are dependent on how much you wager. To be in with a chance of hitting it big, you'll need to hit the Pick Win feature which is activated when three of Thor’s Hammer symbols anywhere across the reels.

You'll then be presented with a classic 'Pick 'Em' round. Using Thor's Hammer, smash the on screen shields to reveal a prize. Match three and that's what you'll be awarded. This includes the Mini Jackpot, the medium-sized Midi Jackpot and of course the enormous Mega Jackpot. To give an idea of how big the Mega Jackpot can get, it was hit for over £5.4m in April 2015!

There are still plenty of chances to bag a big payout even if you don't get anywhere near the Mega Jackpot. The Free Spins feature is triggered when three or more scatter symbols (Odin's raven) appear anywhere on the reels and can be a very profitable round.

Three ravens offer 10 free spins, four provides 15 with five giving you 20 free spins. Wins in the Free Spins round are boosted by a 3x multiplier. Find three ravens during the bonus round and even more free spins are triggered. In the base game, Hall of Gods also comes with an Expanding Wild feature which is activated when the Midgard Serpent wild symbol appears on reels 2, 3 and 4. It will then expand to take over the whole reel boosting the possibility of scoring a big win.

As we've come to expect from NetEnt, Hall of Gods is beautifully illustrated, with the gods of Valhalla like Thor and Odin looking great. The bonus features keep the action flowing and enormous payouts are available via the Mega Jackpot. What's not to like? It’s changed a few players’ lives in recent years with 6 multi-millionaires created.

If you like progressive jackpot slots, you can’t go wrong with NetEnt’s Mega Fortune which is responsible for the world’s largest ever online jackpot at a staggering €17.8 million! However, if Norse mythology is your thing, you should try Thunderstruck II by Microgaming and Viking Vanguard by WMS.