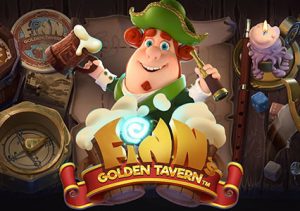 The set up in Finn’s Golden Tavern is a little unusual. The action takes place on a 5x5 grid. There you’ll find an assortment of drinking vessels and gold coins with values of 5, 10, 20 or 50 coins attached. If you get 3 or more coins anywhere on the grid, the values are added together and won. Just like Finn and the Swirly Spin, this follow up uses the spiral spin mechanic.

Symbols appear on a trail. Create a winner by landing 3 or more matching symbols vertically or horizontally. An avalanche follows with the successful symbols removed (Avalanche Reels feature). New symbols then replace them in the trail. The avalanches continue until no new winning configuration is created.

NetEnt has packed a good range of extras into Finn’s Golden Tavern, starting with the Random Coin feature. If you see a treasure chest symbol in the loop just outside the central reel position after an avalanche follows, lower value symbols transform into coins to create an instant win.

On any spin you could see a big hulking fist hammer onto the reels. Known as the Fist Slam feature, this moves the symbols around and turns what was a losing position into a winning one.

If there’s a treasure chest sitting in the middle position of the reels following an avalanche, you’ll receive 5 free spins in the Free Spins feature. The avalanches are in play here too. If an avalanche results in a wild being added, it’s collected in a meter. For each 5 wilds in the meter, the multiplier increases by 1x.

The Free Spins Coin Bonus feature is triggered if the treasure chest falls into the middle position of the reels during the free spins. Coins are randomly added to the reels to create a new winner.

The spiral spins and avalanche reels made Finn and the Swirly Spin an unusual but popular release. There’s a similar feel to this sequel. As usual for a NetEnt slot, the design is top notch. The gameplay is rather unusual though and won’t be for everyone, especially if you like simple fruit machines, for example.

The Irish luck theme remains a popular one and Finn’s Golden Tavern is a perfectly solid example – it can provide wins of 1,000 times your stake from each free spin. However, I prefer harder hitting slots with more substance and purpose – Yggdrasil Gaming’s Rainbow Ryan is a good example of this and also has an Irish luck theme.