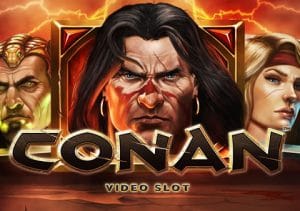 As usual for a Net Entertainment offering, the design in Conan is very high end. Joining the lower value coins are ropes, swords and helmets as well as members of the Barbarian leader’s court. Conan is the top payer. Land 6 across a payline for a payout of 6 times your total stake. There are also 2 different wilds. More on them below.

If the high spec design is a given, the range of extras on offer in Conan come as something of a surprise.  There are base game modifiers as well as triggered bonus features:

Land 3 or more scatters on the same spin and you’ll activate the free spins round. You’ll then have the pick of 3 different rounds. With 3, 4, 5 or 6 scatters giving you 10, 15, 25 or 50 free spins, the Linked Reels feature applies on every free spin with up to 6 reels being linked! Anyway, here are your options:

Not many better-looking slot games

You won’t find many better looking and sounding slot games than Conan. The visuals are superbly drawn the sweeping score fits the theme perfectly. The range of extras impresses too. The modifiers can spice up the base game and the extras can make the free spins feel like it’s worth hitting.

Could have had higher maximum payouts

If you like your slot games to come with quality design, then you’ll find just that in Conan. We enjoyed the features too. However, this is Net Entertainment’s worst ever branded slot game due to the low win potential – it’s a pity though as it does look great.

On a brighter note, I would try Narcos (based on the Netflix series about drug lord Pablo Escobar) and Vikings (based on the epic television series) as they both offer bigger wins (they are also both by Net Entertainment).