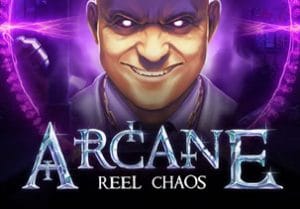 The design in Arcane: Reel Chaos is very high spec. With the ruins of an old church in the background, you’ll see A to 10 royal symbols spinning around the reels. They’re joined by the 4 super heroes Flare, Chronos, Zero.x and Psyop. Baddie Deep Pockets is the top paying symbol. Land 3, 4 or 5 of these on a payline for a payout of 1.75, 7.5 or 50 times your stake. There’s also a wild that substitutes for all of the standard symbols.

Net Entertainment has packed plenty of features into Arcane: Reel Chaos, starting with the 4 randomly triggered modifiers. Each one is associated with a particular hero:

There’s also a triggered Free Spins feature - this is activated by landing the scatter on reels 1, 3 and 5 on the same spin. It’s a 40stage bonus where Deep Pockets takes on each of the superheroes in turn. The baddie has different health points in each level. Defeat him and you’ll progress to the next level. Level 1 starts at 1x payouts. Make it through the successive levels and 2x, 3x and 4x multipliers are on offer. Make it through all the levels and a bonus prizes is awarded too.

If you like plenty of backstory from your slot games, then you’ll find plenty in Arcane: Reel Chaos. There’s a dystopian feel to the visuals which are nicely done and there’s lots of gameplay on offer from the 4 modifiers and the free spins round.

Put all that together and you Arcane: Reel Chaos is a very playable slot game that combines quality design with some cracking bonus features. You can win a cool 10,000 times your stake if you fill the reels with high value Deep Pockets symbols and the 10x multiplier from the Chrono’s Re-spin feature too. If you want big win potential, Dead or Alive II from Net Entertainment is unrivalled!